The Pays de Lamastre is a territory with a remarkable natural heritage and landscape. As proof, it has been part of the Monts d'Ardèche Regional Nature Park for over 20 years. A beautiful recognition!

Created in April 2001, the Monts d'Ardèche Regional Nature Park was born from the initiative of the castaneïculteurs, the chestnut producers, anxious to promote their heritage. If the chestnut strongly marks the identity and the landscape of the Monts d'Ardèche, many other riches bring it to life: rural know-how, blueberry production, terraces, mills and milling ... Between volcanoes and valleys, in the heart of breathtaking landscapes, the Monts d'Ardèche are since 2014 also recognized by UNESCO for their landscapes and their geological sites with the Global Geopark label.

Land of welcome and meetings that vibrate to the rhythm of the chestnut festivals, the Castagnades, and cultural events, the Monts d'Ardèche are also at the heart of artistic creation, they are thus home since 2017 to a large-scale artistic journey: the watershed! 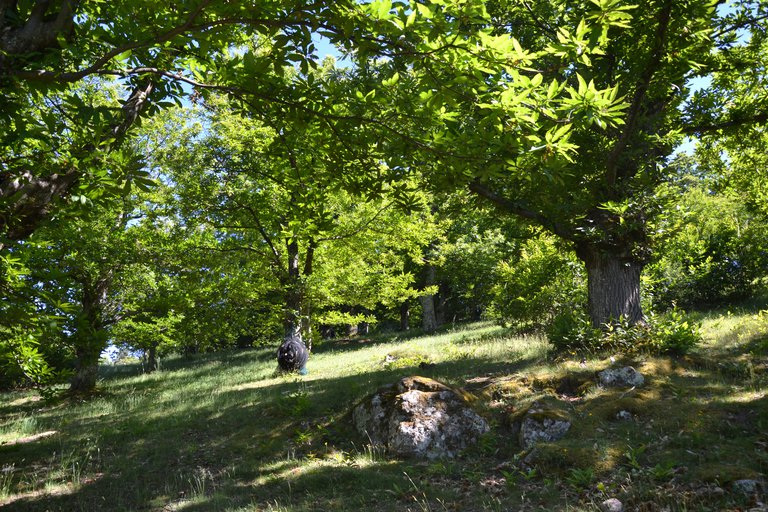 The Parc des Monts d'Ardèche is one of the 56 regional nature parks in France, covering 2200 km² and 152 municipalities.

Septembre 2014 : labelling of the Monts d'Ardèche by UNESCO as a Global Geopark

To know the Park and its mission: www.parc-monts-ardeche.fr 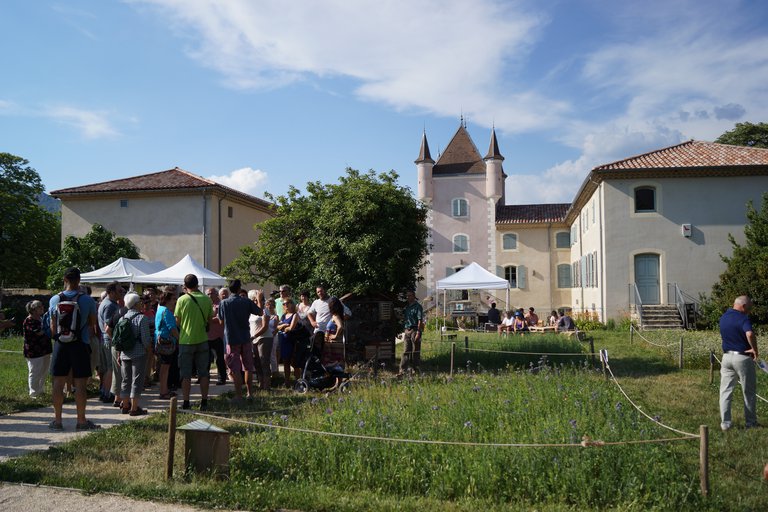 What strikes the visitor of the Monts d'Ardèche right away is the great diversity of landscapes that can be found in just a few kilometers.

The Monts d'Ardèche Park is a territory of medium mountains, composed of a mosaic of wild landscapes or shaped in terraces. From the southern valleys to the snow-covered peaks of the Mézenc, the natural riches of the Park are numerous.

The Park is also a water territory. Crossed by three large rivers, the Ardèche, the Eyrieux and the Doux, into which many tributaries flow, these mountain streams bring an incomparable freshness to the territory and are the support of many bathing places. The Chassezac, the Beaume and the Drobie in the Cévenne d'Ardèche, the Besorgues, the Volane, the Fontaulière, in the Pays de jeunes volcans d'Ardèche, the Glueyre, the Talaron and the Eysse in the Boutières are other treasures of the territory. Without forgetting of course the Loire which takes its source on the Massif du Mézenc-Gerbier... Each of these rivers enchants the landscape as much as they have shaped it for millions of years. As for the Bourges, it flows over Péreyres, sixty meters high to form the most beautiful waterfall of the Park: the Ray-Pic waterfall.

In the heart of heritage

But here, the exceptional nature is combined with a very rich cultural and built heritage. From the traditional beehives dug in the trunks of chestnut trees to the mills, large industrial buildings nestled at the bottom of the valley, the Parc des Monts d'Ardèche conceals treasures of heritage testifying to the thousand-year-old ingenuity of man to adapt to his territory and master the slope.

The most remarkable elements of the Park's built heritage date from the early Middle Ages. In ruins or remarkably preserved, each of its castles, each of its churches and abbeys evokes the episodes of the history of the territory, rich in adventures. 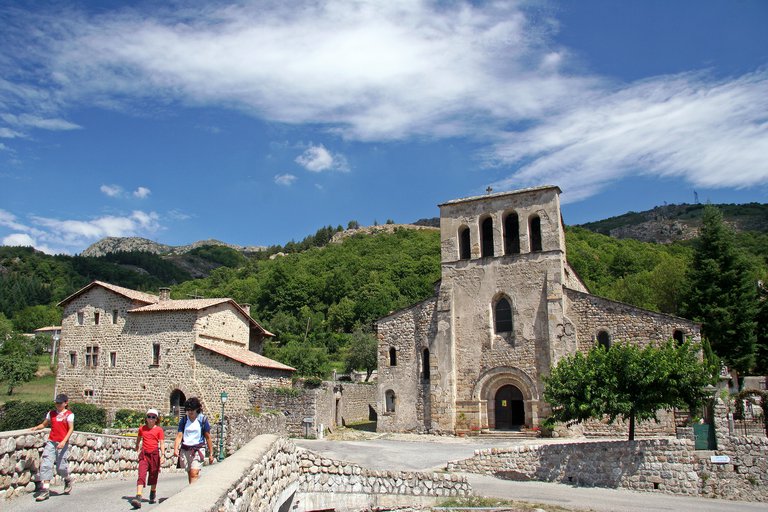 Other emblematic landscapes of the Monts d'Ardèche Regional Natural Park, the chestnut groves are particularly beautiful in autumn, when they are adorned with superb golden and glowing colors that illuminate the slopes. It is also at this time that the chestnuts are harvested and that the traditional Castagnades festivals take place. On this occasion, many walks guided by the producers allow you to discover the chestnut grove from the inside. The rest of the year, thematic paths and guided walks are also proposed. Do not miss those of  Désaignes or Lamastre  among the most beautiful of the Park which open their doors to the public from spring to fall: : Bogue et Châtaigne & La Ferme du Châtaignier.

Finally, when we talk about heritage, we cannot fail to mention the numerous sites of discovery (nearly thirty!), gathered within the network of the Houses and Museums of the Park and which, although very different, share two common points: they all present a new facet of the Monts d'Ardèche and its history but above all they are animated by enthusiasts who will have at heart to share their attachment to their heritage. They are all essential places to discover the Monts d'Ardèche, with permanent collections of high quality, but they also offer a wide range of activities for all ages: exhibitions, hikes, workshops, concerts... Like an invitation to discover our heritage. Do not hesitate to contact them to discover their program!

Once a poor man's food, chestnuts have nevertheless long since acquired their letters of nobility. The list of products made from chestnuts is growing every year. In the heart of the Cevennes or Boutières, the chestnut growers participate in the maintenance of the emblematic landscapes of the Ardèche territory and contribute to the economic development in the slopes. Whether they grow Pourettes, Comballes or other local varieties... each chestnut grower offers a range of products based on chestnuts: jam, flour, etc. Beyond the incomparable flavor of the chestnut, a walk in a chestnut grove, especially in autumn, is always a moment of great emotion and color. 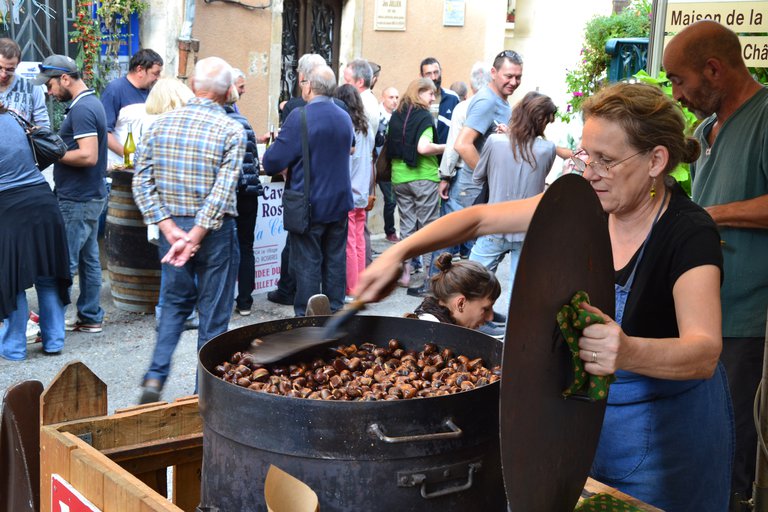 Alongside the chestnut, from the high plateaus of Mézenc to the slopes of the Cévennes, livestock farming is the mainstay of agriculture in the Monts d'Ardèche. It is characterized by some emblematic products of a rare quality:

- a meat of beef fed with hay, the AOP Fin Gras du Mézenc,

- a goat cheese with character, the AOP Picodon,

- grilled lamb from the Ardèche,

The fruits of the breeding are as many colors on the palette of the landscapes of the Monts d'Ardèche Regional Nature Park.

The UNESCO World Geopark label of the Monts d'Ardèche

Since September 2014, the Monts d'Ardèche Regional Nature Park has been classified by UNESCO under the world Geopark label thus becoming the second UNESCO label for the Ardèche after that of the Grotte Chauvet Pont-d'Arc.

This international recognition testifies to a geological wealth of worldwide interest which is reflected in spectacular sites accessible to the public.

On the territory of the Park, nothing is missing for a living approach of the history of the earth, all the eras are indeed represented there since more than 550 million years. Few territories have such a rich geological history and diversity. Around Lamastre, the landscape is essentially made up of Gneiss, migmatites and granites which testify to the construction and then the erosion of a gigantic mountain chain more than 300 million years ago.

Created in 2000 on the initiative of 4 European territories, the Geopark label is now awarded by the Global Geoparks Network and UNESCO to more than 150 territories on 5 continents. What do they have in common? They present a geological heritage of worldwide interest and work to promote it.

The label is based on three pillars:

True matrix of the landscapes of the Monts d'Ardèche, the watershed forms a ridge line which delimits, to schematize, the plateau of the slope. From the Massif du Mézenc, it hugs the GR7 but makes the waters divide, joining the Atlantic on one side and the Mediterranean on the other. In Ardèche, the paradox is that the flat lands are found in the mountains, at an altitude of more than 1000m.

The line inspired THE WATERSHED, an "open-air" art trail hosting works of art created in situ in the heart of an exceptional heritage.

Near the works, furniture in chestnut designed by the designer Eric Benqué and landscape Mires imagined by the landscape designers Gilles Clément and IL Y A mark out the line.

The route can be discovered along the GR7© hiking trail on foot, by bike and on horseback, but also by car accompanied by the Toplamak collective's artistic GPS. In winter, most of the works are accessible by snowshoes or Nordic ski.

From the first works of humanity housed in the Grotte Chauvet to contemporary creation, the Ardèche is a source of inspiration.